Church of Saint John of Malte

In its present form, the church of Saint John of Malte is the first fully gothic provençal church : it was built between 1270 and 1280 by the Hospitaliers of Saint John of Jerusalem and replaced an older building which had been dedicaced by the papal legate, Cardinal Pierre de Colmieu on May 3rd 1251. The lightness and the grace of the gothic intersecting ribs which lead the thrusts into the pillars, give the dynamics and rythm, entitling it to the name of ‘Sainte-Chapelle of the South’ (after the Sainte-Chapelle church in Paris). The side windows are smaller than those of the Ile-de-France but the size of the apse window is exceptionnal in Provence. The general aspect was restored by recent works in 1996, enhancing the two colors with ocre wall surfaces and white architectural structures, that bring back brigthness, elegance and movement to the volume of the church.

The present building was intended to be the mausoleum of the Counts of Provence :
– the tomb of Raymond-Beranger the 5th and his wife Beatrix of Savoy in the northern transept
– the tombs of Beatrix of Provence and her husband Charles the 1rst of Anjou, kin of Naples, are lost, ransacked during the French Revolution.
This church can be viewed as a kind of ‘Saint-Denis in Provence’, after the church of the kings of France in Saint-Denis, nearby Paris.

The church was first shaped like a latin cross and comprised only the nave, the transept, the bell tower and watch-towers, north and south of the choir, plus the Hélion de Villeneuve chapel (14th century), with its ribbed vault displaying liernes and tiercerons.

On the outside, the score of the buttresses, topped with pinnacles, are hidden behind poor residential houses erected against the monument in the 17th century. The bell tower, 67 meters high, was completed in 1376. The priory, now Granet art Museum, was a hospice accommodating pilgrims and taking care of ill people.

The church and the priory were built in the countryside outside the city walls. In the 17th century, they were included in the perspective of the new Mazarin district, designed by Michel de Mazarin, brother of the minister of Louis the 14th. The building was reshaped in the 17th century by the prior Jean-Claude Viany, who built six chapels between the buttresses and added the turret of the south side, symmetrical with the north one which gives access to the bell-tower.

In 2018, after 225 years, three new bells have completed the carillon, composed of four bells, the three older ones having been melted during the Italian campaign of Napoléon. 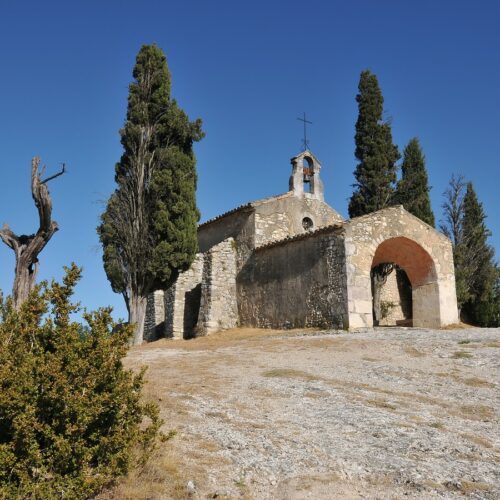